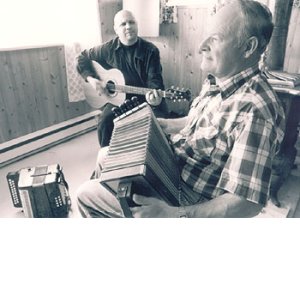 Vince Collins was born on July 19, 1935 in St. Anne's, Placentia Bay, Newfoundland, into a typical outport family of that era. While his mother, Bridget, managed the household and raised twelve children, his father Jim, fished, hunted, and worked building schooners.

Both Bridget and Jim were accordion players, and the love of music was nurtured in all their children. They in turn all learned to play the accordion, and evenings spent at home were often passed with the children taking turns playing the tunes they had learned from their parents. Jim Collins was a well-known accordion player in Placentia Bay, and gained a reputation as a particularly light-footed step dancer. He also composed many of the tunes he played. Vince often played for his father to stepdance and his first original composition, Vince's Triple, became one of his father's favourite stepdancing tunes. Vince went fishing with his father at a young age, but, like many other young men of his generation, spent his working life in a variety of resource-based jobs. He retired in 1996, but regularly played music throughout the years, whether after work in the lumber camps, at home with the family or on weekends and holidays spent at his beloved cabin.

In 1965, Vince married his wife Dorothy and moved to St. John's. Their son Glen was born in 1968, and although he was exposed to a lot of his father's music at a young age, Glen was an adult before he came to fully appreciate his father's unique musical talent. Now Vince takes great pleasure in playing his tunes to Glen's guitar accompaniment, having come full circle from the days when he played with his own father back in St. Anne's.

Vince Collins bought his first accordion at O'Brien's Music Store in 1956, and played it all the way back home aboard the Newfie Bullet. Today, almost fifty years later, he is still using the same accordion to play an extensive repertoire of singles, doubles, step tunes and waltzes, the tunes he learned from his parents growing up in St. Anne's, as well as some of his own compositions. In September, 2002, he realized a lifelong dream by recording his first compact disc, entitled Lifting Out the Stove, featuring many of the old Placentia Bay dance tunes, his own compositions and father's favourite, Vince's Triple, and reminiscences of his days playing for dances when he was a younger man.

Lifting out the Stove
Read more...